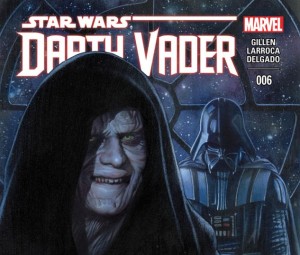 Vader goes toe to toe with the various androids created as his possible replacements. There are some character ideas here that we only sorta get a glimpse of, a ‘program’ that takes a host’s body, manipulating it to feel no pain and an Admiral Ackbar/General Grievous hybrid being the standouts. They’re all dispatched easily enough but interestingly, are all left alive, possible recurring characters? I’d like Gillen to put a bit more personality into them if that’s the case. Vader is displeased that Palpatine has had Cylon working on his replacements for years, the Emperor tells him to pretty much ‘suck it up you big cry baby’ that’s the Sith way. As much of a powerful bad ass as he is in this book, Palpatine still makes Vader look like a little bitch, it’s great. Vader storms off in a sulk, and gets some interesting news from Boba Fett, cleverly tying this issue into the last issue of the Star Wars title. Star Wars has overtaken Vader as my preferred SW title, they’ve both been fun, but I’m not sure if both (or either) will be around for me after Secret Wars.